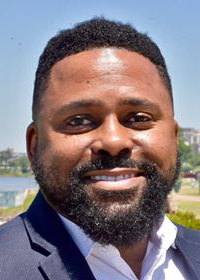 1. If elected or re-elected to the city council, will you propose programs and/or initiatives to limit the number of arrests for minor offenses in the city?

I am Completely against the school to prision pipeline. Memphis has issues with lead poisioning and contamination and this is a generational problem that no one is addressing whic is leading to many of the problems that we are seeing about crime. Also, the prision industrial complex needs to be fought. We cant allow out children, and in particular, out black children to be victimized by a system that will arrest them for profit and offer no help to their situations.

2. If elected or re-elected to the city council, will you support a pre-booking diversion program for drug-related offenses and for those suffering from mental health issues?

Years ago, i was working at a local college and I had a student that had a felony on her record. I got an attorney friend to look over her record and it turned out that she had recieved this charge after a fight that she had with another girl when she was only 18. She was not offered diversion, as she should have, and she felt that her whole life was ruin by this one event. I will be in full support of diversion programs not only for drug-related offenses but for other first time charges as well

3.If elected or re-elected to the city council, will you support a policy to require transparency and democratic accountability before city agencies acquire new surveillance tools?

4. If elected or re-elected to the city council will you work to make stop and arrest data, including race and ethnicity data, available to the public quarterly?

5. If elected or re-elected to the city council what will you do to ensure a timely, transparent and independent investigation whenever an officer uses deadly force?

Yes, i will also fight to strengthen CLERB and allow for the recording of interrogations of witness by police

6. Name 3 steps you would take as a council member to make the Community Law Enforcement Review Board (CLERB) more effective.

I will give the board supeona power to the board
Allowing them a place in policy creating procedures
Allow the board access to police reports, dash and body cam footage

7. Would you support policies, programs or initiatives to dismantle the school-to-prison pipeline?

I will start with increasing funding to schools and push to change education laws that allow for teachers and schools to be more creative in their approaches to education. Right now, we are pushing for the passing of tests and this is destryoing the creativity of our children. Also, i will push for more psychological testing and councelling while testing our kids of lead and other contaminates. I will not push a war on poor people. Poverty is a problem and not the people. I will push for investments in GED, trade and job training programs centers in poorer communities. Also, i will push for an ending of redlining policies which have destroyed entire communities.

8. What does criminal justice reform mean to you?

I am an African American male and i have been arrested and detained by police. Reform should mean change but we see that it does. I want criminal justice transformation. We should not be arresting for profit. Incarceration should not be for profit. For me, reform means to do away with the monetized system and we need to go back to true reform. Allow people to finish GED and get degrees while serving time.