On the issue of bail reform, voters support a shift from the current cash bail-only system.

*Some people say that judges should release certain defendants under the court’s supervision without having to pay bail, after the judge has studied their individual case and circumstances. They say the current system in Tennessee lets people who are accused of serious or violent crimes leave jail if they can pay their bail, while low-level, non-violent offenders who can’t afford to pay bail are stuck in jail, even when they aren’t considered a threat to public safety.

Once voters become familiar with civil asset forfeiture, they believe it needs reform.

Now, as you may know, through civil asset forfeiture, law enforcement here in Tennessee can seize and sell property from a citizen based only on their suspicion that it has been involved in criminal activity, without having to charge the citizen with a crime.  Under this rule, police departments across the state can sell or auction forfeited property to supplement their budgets. Law enforcement officials in Tennessee alone have seized and forfeited over more than $85.9 million dollars in property between 2009 and 2014, and current laws allow these local police departments to keep almost all of what they seize. 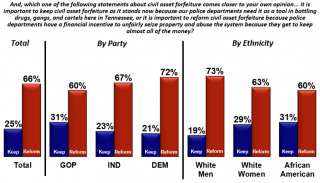 The results are clear: Voters in Tennessee are ready for substantial criminal justice reform. To learn more about ACLU-TN’s work to achieve a justice system that is fair and equal for all in our state, click here. To read the full results of the poll, click here.