The ACLU’s First Amendment campaign reminds us that Muslims and Arabs are protected by the Constitution too.

In 2006, a human rights advocate, who is a friend, was prevented from boarding his flight from New York to California because of Arabic.

Yes, Arabic. The language spoken by more than 400 million people worldwide, making it one of the top five languages in the world and reportedly the fastest growing in the U.S., was the culprit.

My friend was wearing a T-shirt with the words “We will not be silent” in both Arabic and English. He was told he could not fly until the offending Arabic script was covered. And lest we think our issues with Arabic have resolved themselves in the last decade, remember that simply speaking Arabic on an airplane was grounds for removal from a flight just last year.

How we got to this point is a complicated matter, but the path forward doesn’t have to be.

Since the terrorist attacks of Sept. 11, Arab-Americans and American Muslims have come to be viewed by some of our fellow citizens and our own government as either victims of hate or potential perpetrators of violence. The latter view dictates we should be seen through a securitized lens and has produced profiling and surveillance of our communities, watch lists, and special registry programs, to name but a few programs targeting us.

However, both oversimplifications fail to capture the experience of being Arab or Muslim in post-9/11 America, and last year’s presidential campaign demonstrated that with extraordinary clarity. We have heard condemnation of the surge in hate crimes but little discussion on how the rhetoric during the election contributed to that hate, particularly by leading policy makers and candidates. Instead of challenging bigoted misinformation, some candidates furthered it.

At a New Hampshire town hall, a voter declared to then-candidate Trump, “We have a problem in this country. It’s called Muslims.” He concluded by asking, “When can we get rid of them?” Mr. Trump’s answer: “We are going to be looking at a lot of different things.”

One could reasonably suggest President Trump’s Muslim bans, in both incarnations, were the logical continuation of that conversation in New Hampshire. The Muslim ban is a candidate delivering on a campaign promise unlike any we have seen in our lifetime.

Thankfully, it is not that simple in our country.

Standing in the path between bigotry and policy is our Constitution. In this case, specifically the First Amendment.

Among the five freedoms enshrined in the First Amendment are freedom of speech and the right to religious freedom. Thus far, numerous judges have found the bans to be in violation of our First Amendment and their implementation has been stalled. In the guise of keeping us safe, Trump has proposed unnecessary, ineffective policies that sow fear. Americans know it, and responded by showing up at our nation’s airports with banners and legal pads to defend our Constitution and protect the people most impacted, including those who speak the “feared” language of Arabic.

In addition to winning the first stay of the ban, the ACLU has launched a “We the People” campaign that features the First Amendment translated into other languages, including Arabic, and is displaying it in ads and billboards. Seeing the First Amendment in Arabic is particularly satisfying at this moment as a fitting reminder that those words apply to all of us. 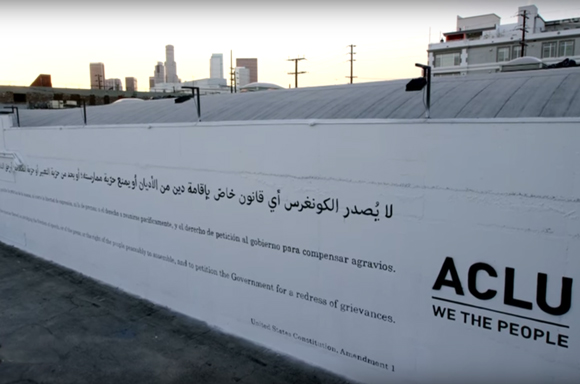 I worked on Capitol Hill on Sept. 11, and I was in the room when Attorney General John Ashcroft first presented the Patriot Act to congressional leadership. Many at the time asked: Are we striking the right balance between protecting our national security and our civil liberties? We should always remember that if we are told we must choose one or the other, we are being offered a false choice and a shortsighted remedy that will provide neither. The same goes for bigoted, undemocratic policies demanding that we choose between freedom or safety.

Like those who advance them, policy remedies can either move our country forward or take us back.

The slogan on my friend’s shirt belonged to a resistance campaign led by the White Rose, an extraordinary group of young people who were brutally executed for distributing leaflets in opposition to Nazi policies in Germany during World War II. The phrase “We will not be silent” is how they concluded their fourth resistance flyer.

Our fear of Arabic — or more specifically, of Arabs and Muslims — remains a problem for some, including those who currently hold some important positions in our government. It is driving an increase in incidents of hate and bad policies. We hope they will soon get over that irrational fear but until they do, we too will not be silent and are protected by the words of our Constitution and the judges sworn to uphold them.

After all, remember that my friend who was targeted for the two words of Arabic on his T-shirt is protected by the 34 words of Arabic — or 45 in English — appearing on a billboard near you.

If you want your own sticker copies of the First Amendment translated in Arabic, English and Spanish, they are available for pre-order here.