Time Marches Forward and So Do We

Watch a short history of trans discrimination, resistance, and survival, and join the fight.

Every day, I am confronted with antagonistic queries about why the ACLU would focus on trans rights work. “How many trans people are there really?” we are asked. Or, “Isn’t this just a new niche issue that doesn’t affect a lot of people?”

The assumption is that trans existence is new, that trans people are so marginal as to be unworthy of advocacy, that discrimination against such a new and insignificant community should not consume our attention or resources.

None of this is accurate.

Trans people have always existed. And while we have and continue to face rampant and deadly discrimination, so too have we built beautiful communities and movements of resistance and love.

A video released today by the ACLU in collaboration with Zackary Drucker, the Transparent producer and artist; Laverne Cox, the Emmy-nominated actress; and the creative team of Molly Crabapple, Kim Boekbinder and Jim Batt tells this story of trans history and resistance, which is as relevant and as urgent now as ever. 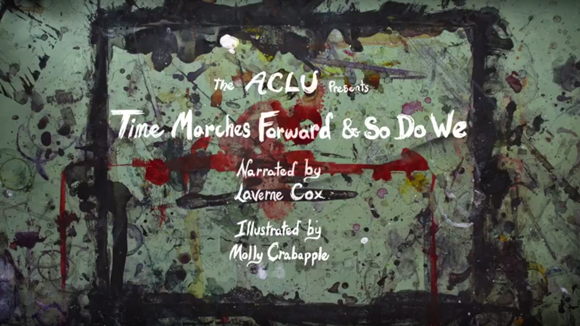 In one comprehensive survey of more than 27,000 transgender individuals, almost one third of respondents reported living in poverty as compared with only 14 percent of the U.S. population. Over half of respondents reported being denied health care related to their gender transition. A quarter indicated that they did not seek medical attention at all due to fear of discrimination. And more than three-quarters reported experiencing harassment in school because they were trans, ultimately leading 17 percent of respondents to drop out of high school altogether.

All of this contributes to a cycle of discrimination and violence that leads to homelessness, incarceration, and ultimately, for many — particularly trans women of color — premature death.

Indeed, at least 15 trans people have been murdered in the country this year, almost all of them women of color. The numbers are likely higher, but violence against trans individuals so often goes unreported, or the victims are inaccurately classified by their assigned sex at birth.

So while there is an increase in visibility and attention to trans people, the discrimination remains staggering. And without accurate information about trans people, our lives, and our rich histories, the impulse to push us out of public life will continue. But we continue to tell our vivid, vibrant, and critical story of trans resistance.

Time marches forward, and so do we.