In Our Backyards: Money Bail in Rural Tennessee 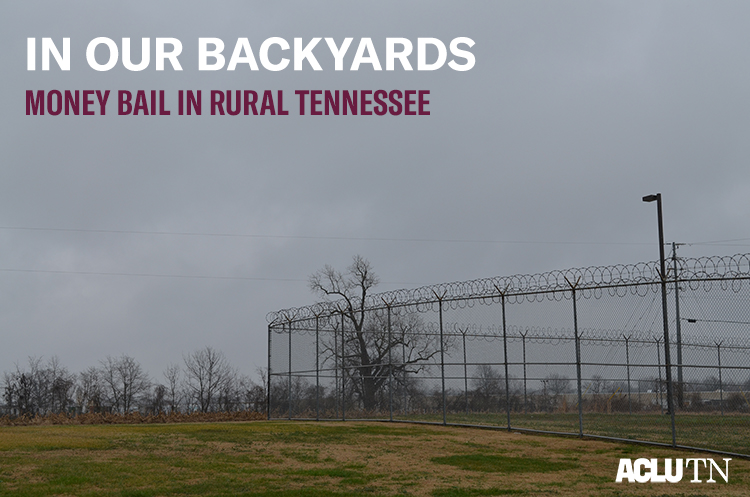 Locking up people before trial because they cannot afford to pay bail is a leading cause of mass incarceration in Tennessee and its impact is devastating for people who live in our state’s rural communities. Half of the nearly 30,000 people sitting in our state’s county jails are pre-trial detainees who are legally presumed innocent and are eligible for release. But because they cannot afford to pay a monetary bail amount set by a judge or magistrate, they instead languish behind bars while awaiting trial, often for low-level offenses.

Being incarcerated pre-trial can have a life-altering snow-ball effect, as many working Tennesseans lose their jobs or face eviction because they are unable to make bail and return to their homes and places of employment. Others face the terrifying possibility of losing custody of their children while they wait for their day in court.

While bail is a driver of mass incarceration statewide, its impact on rural communities is, in many cases, more severe than it is in Tennessee’s city centers. Since 2000, the pretrial incarceration rate has increased 163% in the state’s 53 rural counties, compared to an increase of only 2% in the state’s urban counties. While larger, more densely populated counties logically have more people in their jails, in recent years small cities and rural counties in Tennessee have been those with the highest rates of incarceration per capita.

Money bail has created a two-tiered justice system in our state, where Tennesseans who have limited incomes – particularly those who live in rural communities – are punished more harshly than their neighbors who have access to resources and money.

Through a grant provided by the Vera Institute of Justice, ACLU-TN staff were able to travel to three rural communities across the state – McMinn County in East Tennessee, Warren County in Middle Tennessee, and Obion County in West Tennessee – to meet with and learn from people who had seen, first-hand, how this unfair practice had hurt them or others in their towns. These individuals bravely agreed to share their stories and lend their expertise and experience to better help people across the state of Tennessee – from community members in rural, suburban, and urban settings to state lawmakers considering legislative reforms – understand the dangerous, ineffective, and predatory ways the bail system hurts their neighbors.

These are their stories.

From McMinn County, we spoke to:

In Warren County, we spoke to:

Finally, in Obion County, we spoke to:

Transforming our state’s treatment of people incarcerated while awaiting trial, including how communities rely on the use of money bail, will result in fewer people unnecessarily held behind bars simply because they cannot afford to post bond.

Let us know how money bail impacts your community or share your story about your experience with the bail system by taking our Money Bail Community Impact Survey. Your responses may be shared with state lawmakers as they discuss bail reform initiatives during the 2021 legislative summer study on bail issues (see below for more details).

This summer, lawmakers will take up the following bills during a study session (more bills may be added to this list):

The Vera Institute of Justice

In Our Backyards – The Vera Institute of Justice

Incarceration Trends in McMinn County – The Vera Institute of Justice

Incarceration Trends in Warren County – The Vera Institute of Justice

Incarceration Trends in Obion County – The Vera Institute of Justice

Selling Off Our Freedom: How Insurance Corporations Have Taken Over Our Bail System (American Civil Liberties Union’s Campaign for Smart Justice and Color of Change)

No Money, No Freedom: The Need for Bail Reform (ACLU of Washington)

“Behind Many ‘Mom and Pop’ Bail Bonds Shops Is a Huge Insurance Corporation Out to Profit From Misery,” by Margaret Dooley-Sammuli, Criminal Justice and Drug Policy Director, ACLU of California

“Poverty Is Not a Crime, so Why Are People Being Trapped in Immigration Detention for Being Poor?,” by Katie Egan, Washington Legislative Office & Joanne Lin, Senior Legislative Counsel, ACLU

“How race impacts who is detained pretrial,” The Prison Policy Initiative (2019)

“Jails matter. But who is listening?” The Prison Policy Initiative (2015)

“Conservatives Have a Stake in Bail Reform,” The National Review (July 2017)

“Opinion: The one issue that could bring Democrats and Republicans together,” CNN (March 9, 2021)

“How the big business of cash bail targets the poor,” MSNBC (September 2019)