The Fourth Circuit recognized that there are still limitations on invocations by governmental legislative bodies.

The prayers were delivered by commissioners themselves. No one else was allowed to give the prayer. Over the years, the prayers referred to only one faith — Christianity — and were proselytizing. Multiple prayers, for example, described Christianity as “the one and only way to salvation.” In others, commissioners apologized for the community’s sins and failure to follow Jesus Christ, suggested that Christianity is a superior faith, and expressed a desire for meeting attendees to accept Christ.

Before every prayer began, a commissioner instructed audience members to stand and directed those assembled to join in the prayer. When some residents objected to the prayers, several commissioners loudly recommitted to the practice. One even announced he would go to jail before ending the prayers while another declared that he was being persecuted.

In 2013, the ACLU and ACLU of North Carolina filed a lawsuit challenging the practice on behalf of three Rowan County residents. The district court agreed that the prayers violated the Establishment Clause of the First Amendment and enjoined them. Earlier this year, the case was heard by the entire U.S. Court of Appeals for the Fourth Circuit. Last week, the court affirmed the lower court’s injunction and held that that the county’s prayers were, indeed, unconstitutional. The overwhelming majority of judges on the Fourth Circuit — 10 out of 15 — sided with our clients.

As the court of appeals explained, the “great promise of the Establishment Clause is that religion will not operate as an instrument of division in our nation.”

The ruling is an important development in the law governing the separation of church and state. It recognizes that there are still limitations on invocations, often called “legislative prayer,” delivered at meetings of legislatures, town and county councils, and other legislative bodies, despite the Supreme Court’s ruling three years ago in Town of Greece v. Galloway.

In Town of Greece, the Supreme Court upheld a town council’s practice of opening meetings with prayer led by a rotating cast of local clergy and others. Though the prayers there did invoke specific faiths — most often Christianity — the court recognized that the invocation opportunity was open to people of all faiths and had included non-Christian prayer-givers. However, the Supreme Court made clear in its Town of Greece decision that it was not creating an “anything goes” rule for legislative prayers.

The Fourth Circuit gave voice to those limitations last week, finding that Rowan County breached the constitutionally permissible tradition of legislative prayer because it “linked itself persistently and relentlessly to a single faith” and “elevated one religion above all others.” This practice is a far cry from the invocations upheld in Town of Greece.

Second, “[h]aving structured the prayer opportunity so that Board members alone could give voice to their religious convictions, the commissioners unceasingly and exclusively invoked Christianity.” And these prayers routinely preached the Gospel to attendees, “proclaiming the spiritual and moral supremacy of Christianity, characterizing the political community as a Christian one, and urging adherents of other religions to embrace Christianity as the sole path to salvation.”

Third, commissioners themselves directed those gathered to stand and pray.

And, finally, they did all this in the context of an intimate, official governmental meeting, where attendees — who would thereafter petition the board on a variety of matters — felt pressured to participate to avoid incurring the board’s ire or the disapproval of their community. In fact, when one woman voiced concerns about this prayer practice, she was booed and jeered by her fellow citizens, sending a message to others that they’d better conform to the board’s will. 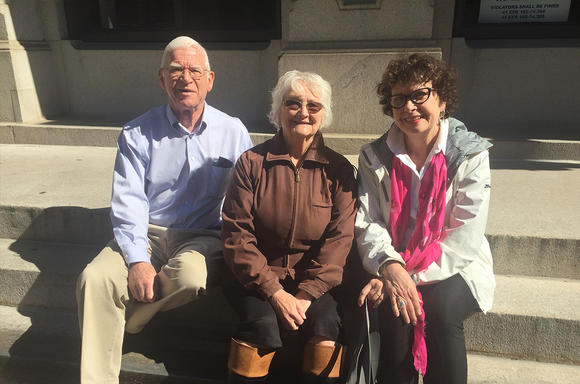 The plaintiffs, Robert Voelker, Nancy Lund, and Liesa Montag-Siegel outside of the Lewis F. Powell Jr. Courthouse in March 2017.

Given this totality of circumstances, the Fourth Circuit correctly concluded that “[i]f the prayer practice here were to pass constitutional muster, we would be hard-pressed to identify any constitutional limitations on legislative prayer.”

The decision was grounded in the religious-liberty principles that animated the First Amendment. As the court of appeals explained, the “great promise of the Establishment Clause is that religion will not operate as an instrument of division in our nation,” and “[i]t was in simple recognition of religious pluralism that the Founders adopted the Establishment Clause.” For that reason, the Constitution “does not permit a seat of government to wrap itself in a single faith.”

Although the lead dissent, joined by five judges, “disparage[d] the majority for its belief in an ‘ecumenical utopia’ and its respect for the pluralistic nature of religious faith in our country,” the majority had another view: “If that be our sin, we shall gladly confess it. . . . In its eager acceptance of state-entwined religious orthodoxy, the lead dissent evokes an America that is not ours and never has been.”

This admonition bears repeating: An America in which religious pluralism and inclusiveness is scorned in favor of exclusionary governmental practices that distance the people from their representative government is not ours and never has been. And, we will keep fighting to make sure it never will be.