AT&T Mobility Fired Me for Being Pregnant

When I found out I was pregnant in the fall of 2014, I was so grateful to have a job with AT&T Mobility.  My husband and I both worked as sales representatives at the company’s store in Elkhart, Ind. Our jobs provided us a stable, comfortable life that we looked forward to sharing with our son. We made $14 an hour, plus commission, and AT&T Mobility provided generous benefits that included paid maternity leave. We both loved our jobs and looked forward to fulfilling sales careers with the company.

But that hope evaporated as my pregnancy progressed.  I had severe nausea that wasn’t just “morning sickness.” I felt sick nearly all the time and had trouble sleeping.  In my second and third trimesters, things got even worse, and I developed cholestasis, a  disabling liver condition characterized by intense itching all over the body.  These difficulties meant that I occasionally was late for my shift, or needed to stay home, and that I had to visit my doctor more often.

These symptoms were scary and stressful on their own.  I never dreamed that they also would cost me my job.

AT&T Mobility has a demerit-based attendance policy – what many employers call a “no fault” policy. What that means is that if you are late or miss work the company assigns you a point, or a fraction of a point. If you receive eight points, you are fired.  The company has a list of situations that qualify as exceptions to the policy and won’t cost you a point, but pregnancy isn’t one of them.

Think about how many women you’ve seen working at your local AT&T Mobility store.  There are thousands of us, all around the country.  Then think about them struggling not to get fired while going through nine months of pregnancy.  And think about how many of them lose their jobs before they even make it to their due dates.

Though my male co-workers were allowed to come and go virtually without penalty, I kept racking up points due to my pregnancy.  If throwing up due to severe morning sickness made me late, I got a fraction of a point. Once, I started bleeding and had to be hospitalized overnight. I accrued a point for that too.

By the time I went out on Family and Medical Leave Act leave in late May 2015, I had accumulated close to eight points.  My store manager pestering me with questions about how long I’d be out, and even trying to convince me to take less than the leave I was entitled to by law.  He told me that he didn’t believe new mothers could be counted on to come back to work.  I felt like I had done something wrong by wanting to start a family.

My son, Luca, was born on June 1, 2015, three weeks early.  In the joyous, sleep-deprived fog that is all too familiar to any new mom, I tried not to think too much about AT&T Mobility’s attendance policy, though I did have to field at least one call from my manager again asking about my return date.  I was grateful to have several weeks of paid maternity leave to spend with my baby boy. I know a lot of women aren’t that lucky. 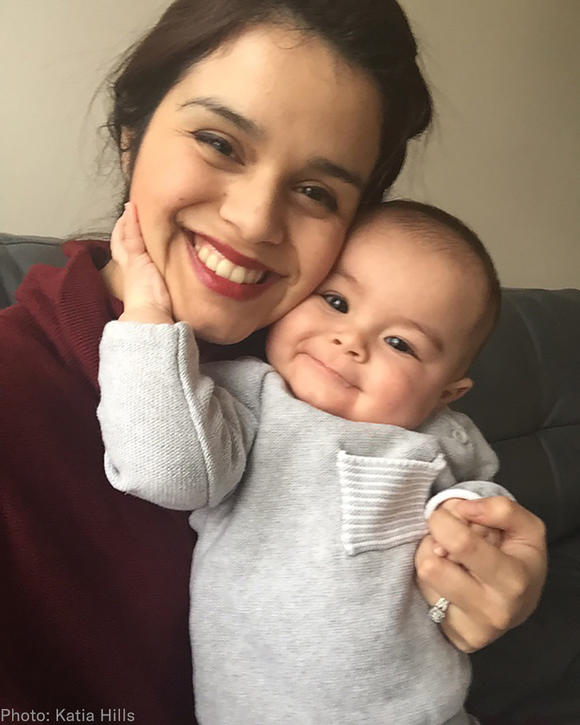 But two days after I returned to work, my manager informed me that additional points had been “processed” during my maternity leave, and I was fired. He claimed he’d appealed to the company, but that the points couldn’t be argued with.  I was heartbroken to lose not just my job, but the hope of a career.  All at once, what should have been the happiest time of our lives was the most stressful. My husband and I struggled after I lost my income. We managed to get by though we had to give up our apartment and move in with his parents.

I eventually started a new job, and my husband and I hope that we will be able to live on our own again soon, for Luca’s sake. But it’s not clear if it will give the same potential for advancement. In the meantime, I want to make sure that what happened to me doesn’t happen to other women – at AT&T Mobility or anywhere else. So today, with the help of the American Civil Liberties Union, the law firm of Cohen Milstein Sellers and Toll, and Indianapolis attorney Lynn Toops, I filed a lawsuit in federal court on behalf of all women employed by AT&T Mobility who have been pregnant and harmed by the point-based attendance policy.

AT&T Mobility’s so-called “no-fault” attendance policy penalizes workers for absences even if they can be justified as being medically necessary. I have learned that this can be a violation of the Pregnancy Discrimination Act, the Americans with Disabilities Act, and the FMLA.  Under all of those laws, workers may be entitled to take time off to address their own medical needs or those of a close family member, making it illegal for employers to impose negative repercussions for such absences. That includes pregnancy, which is one of the most common reasons that women are pushed out of work in the United States – even though this year marks 40 years since the PDA was enacted.

It’s time for companies like AT&T Mobility to scrap their unfair point systems and do their part to make sure that pregnant workers can keep their jobs while starting their families.

Are you a current or former retail employee of AT&T Mobility?  Were you fired for points accumulated due to absences, late arrivals, or early departures due to your pregnancy?
CONTACT US