Bush administration lawyers made the law into a joke, and no one has been held accountable.

In response to an ACLU Freedom of Information Act lawsuit, the government has released several documents that shed new light on Bush administration lawyers’ attempts to evade the absolute prohibition on torture and abuse of prisoners. The documents concern the widely-discredited legal process that purported to authorize the CIA to commit war crimes and include shocking new details.

One revelation is an email by John Rizzo, the CIA’s acting general counsel, which displays the ways in which government lawyers actively undermined the laws they were sworn to uphold. Rizzo, a key architect of the torture program, has claimed, “

[M]y major concern as the chief lawyer was: Were these techniques legal?”

But in a Justice Department Office of Professional Responsibility (OPR) report containing a secret 2003 email, Rizzo revealed his disdain for international human rights treaties like the Geneva Conventions as well as his confidence that the Justice Department’s Office of Legal Counsel (OLC) would find a way to undermine them: 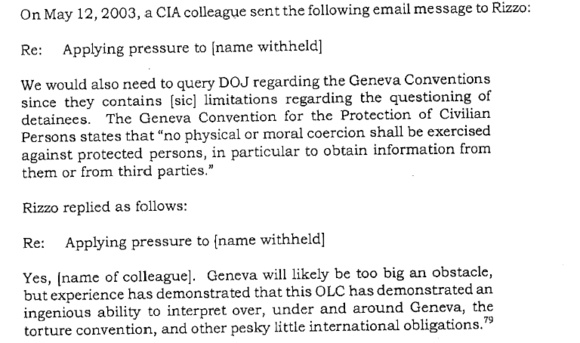 It’s hard to read Rizzo’s email as anything other than a cynical acknowledgment of government lawyers’ willingness to subvert the law. Rizzo later claimed that his email “clearly appears to be an off-the-cuff, jocular remark.” But it’s only a joke because the OLC’s approval of torture was a farce: Its lawyers decided, in Rizzo’s words, to “interpret over, under and around” the law.

As the OPR concluded, OLC lawyers — including torture architects John Yoo and Jay Bybee — did not seriously analyze the legality of so-called “enhanced interrogation techniques.” Instead, OPR found these lawyers’ justifications were “illogical and convoluted.”

OLC’s work was so flawed that a government lawyer who played a key role in initially authorizing torture later denounced it. In 2002, John Bellinger, who was then legal advisor to the National Security Council, played a key role in the authorization for torture and abusive methods from the OLC. Bellinger later told investigators that “there was ‘pressure’ from the CIA from the outset to approve the program.”

Later, in a never-before-seen 2007 letter to the head of the OLC, Bellinger — in his new role as legal advisor to the State Department — criticized a draft OLC opinion that tried to declare the torture program in compliance with the Geneva Conventions.

Bellinger wrote that the opinion was “inconsistent with traditional U.S. treaty practice” and was “unlikely to be viewed as objective legal analysis.” Bellinger made the obvious point that combining forced nudity with “shackling a person in order to prevent sleep” could not be reasonably considered “humane treatment.”

Bellinger observed that “the world would find these acts particularly revolting” — as indeed it did, once the CIA program was made public. But Bellinger seems to have waited a long time to register his opposition: Torturing prisoners was no more lawful in 2002 than it was in 2007.

Perhaps as a result of the obvious revulsion the world felt for subjecting prisoners to forced nudity, the CIA eventually abandoned this practice. But a new passage from the OPR report shows how attached some within the Bush administration were to this particular method of degrading prisoners. The OPR report describes Steven G. Bradbury, a torture architect who headed the OLC from 2005 to 2009, as viewing the ending of forced nudity as “a very, very difficult policy decision”:

The new government disclosure also provides details of the CIA’s attempts to refine its brutality. Although we knew that the CIA’s Office of Medical Services (OMS) guidelines imposed a liquid diet on waterboarding victims to “reduce the risks,” the government had previously redacted what the “risk” was. The new release in the OPR Report shows that CIA medical officers eliminated solid food for waterboarding victims because waterboarding caused detainees to vomit (newly released text highlighted below).

Finally, the new release shows that torture was not just enabled by lawyers and doctors but also by senior officials, who willfully turned a blind eye to what was in plain sight. One example is Michael Chertoff, who was at the time the head of the Justice Department’s Criminal Division.

Chertoff was repeatedly briefed about the torture program. Instead of investigating and criminally prosecuting this illegal government conduct — or even objecting to it — Chertoff repeatedly expressed his desire to remain ignorant. At the outset of the program, at a CIA meeting held in July 2002, “Chertoff was reportedly uncomfortable with the subject and questioned why he was even being briefed.” Chertoff was filled in again in March 2003, but again said that “in retrospect,” he was not sure why he had been briefed. Even when torture led to the death of Gul Rahman at a CIA “black site,” Chertoff did nothing: To the contrary, he “expressed no interest or intention to pursue the matter of” Rahman’s death.

Chertoff’s shameful Justice Department legacy has persisted: No one responsible for the torture program has yet been held criminally accountable. With more information in the public record than ever before — and with loud voices calling for the return of torture — it’s more essential than ever that we pursue accountability.