A training slide reveals that the DOJ instructs agents to ‘use creativity’ and ‘articulate reasonable suspicion in some way.’

This blog originally appeared on the ACLU of Oregon website.

After about five months of waiting, the Oregon Department of Justice last week released its internal human resources investigation conducted by the special assistant attorney general looking into the surveillance of people on Twitter using #BlackLivesMatter.

The report is damning. It paints an abysmal picture of rampant misinformation, beginning with agents and analysists and running all the way up to the deputy attorney general, and it shows how one mistake in judgment can lead to dangerous consequences for the public.

If you’ve already read the report and exhibits, you know that the special assistant attorney general calls for changes in the DOJ’s hiring to reflect a more diverse work force as well as additional training on the laws DOJ agents broke when they collected information about the public’s political views. But you may have missed a critical piece of information that is buried near the very end of the over 150 pages of exhibits. DOJ’s very own training on this issue is fundamentally flawed.

DOJ is teaching its agents how to break the law.

Oregon law prohibits the collection of information based on a person’s religious, political, or social views unless there is also a clear indication of criminal activity. The DOJ’s training teaches agents to evade this law. After laying out the requirements of the law, the slide captured below calls on agents to “use creativity” and “articulate reasonable suspicion in some way.” It goes even further to urge agents to “think of a wide variety of crimes to form the basis of collecting information.” (Emphasis mine.) 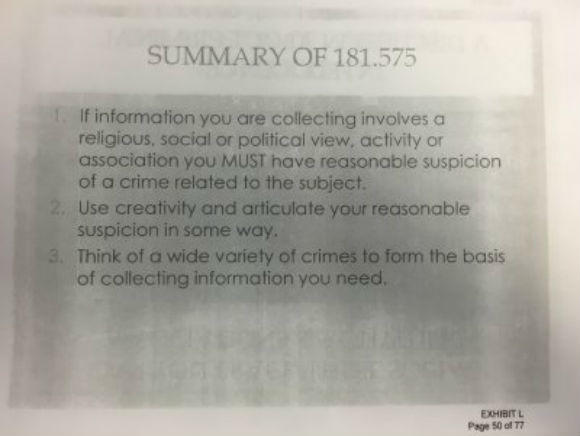 This is so very wrong. Oregon law requires that there be credible criminal activity before any information is ever collected. DOJ is training its agents to illegally collect whatever information it deems necessary and then look for criminal activity to shore up the collection effort. And what’s worse is that it appears that the Oregon DOJ does not even care if the criminal activity is legitimately criminal — just get creative and find something to cover the agent’s backside. That the DOJ is urging its agents to get creative and find some connection to criminal activity is deeply troubling. This language urges agents to use pretense and justification, rather than carefully identifying whether a serious legal standard has been met. This is, quite simply, putting the cart before the horse.

The report also reveals fundamental flaws in the DOJ’s implementation of the training for its employees. The report notes that almost all of the agents misunderstand federal and state laws prohibiting the surveillance of the public based on religious, political, or social views. Specifically, the DOJ employees interviewed were either unaware of policies covering the applicable laws, did not have copies of said policies, or could not recall attending training. Through their own statements, it is clear the Criminal Justice Division’s Intelligence Unit is routinely engaged in surveillance of social media platforms, so it is vitally important that they understand and follow the applicable laws.

Considering these serious issues with the DOJ’s training, it is no wonder why nearly all of the agents interviewed found no problem with the surveillance of people using the hashtag Black Lives Matter. The DOJ has either failed to train them entirely or taught them that this kind of surveillance is perfectly legal as long as they can creatively find some justification for what has already been done.

The report inexplicably concludes that this was an isolated event. This is troubling for two reasons. First, while it is entirely possible that only one report was written based on the results of the search at issue, the responsible agent admits that even after he narrowed his search geographically on only Salem, Oregon, “many images, names and Twitter and Facebook accounts showed up in the results.” The agent then reviewed the results that were collected by the program.

It may be tempting to disregard this act, but it violated the rights of many still as of yet unknown Oregonians. That the DOJ, or its vendor, has since purged this data is irrelevant. Don’t be fooled, if you tweeted or publicly posted on Facebook about #blacklivesmatter and #fuckthepolice, your data was collected and likely reviewed, contrary to the DOJ’s assertions and in violation of Oregon law.

DOJ is teaching its agents how to break the law.

There’s also a big question remaining: Why weren’t the agents and officers asked about the other surveillance that they conducted? We know that Oregon law enforcement has a history of spying on political dissidents with whom they disagree. We cannot accept this glaring omission as proof that all is right in the DOJ. For this reason, we believe a further audit of all of their surveillance techniques and targets is necessary.

The independent investigator does call for more training in the report’s recommendations. That is a good preliminary action, but the DOJ has not demonstrated the competency required to conduct the training themselves. Transparency and capable outside oversight from organizations will be necessary. Meaningful change must begin with opening the doors to the DOJ. In addition to calling for external oversight over the DOJ’s new training on these issues, we believe further investigation about past and ongoing surveillance is necessary.

Change will not happen by allowing the existing errors in DOJ’s systems to remain unchecked.

This post is part of a series exploring what we have learned about the DOJ surveillance of Black Lives Matter in Oregon. Click here to see all of our posts on this topic.